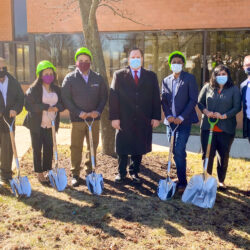 Do you believe in love at first site? Arpit Patel certainly does. It’s how he described touring the location of his soon-to-open Celebree School franchise in Laurel, MD. The easy-in, easy-out ingress of dropping off kids—and picking them up—made the location an easy decision to make for their school. Construction on the site is well underway, which is slated to open next month.

At the official groundbreaking ceremony, the Patels—Arpit, Puja and Shwetank—were joined by the Mayor of Laurel, Craig Moe, CEO Richie Huffman and the Celebree Enterprise Team, and other distinguished members of the Prince George County Chamber of Commerce.

“We welcome working with expert franchisees, like Arpit and Shwetank,” said Jim DiRugeris, Celebree’s chief development officer. “He brings a wealth of franchising experience to his role as a Celebree School franchisee and we’re confident that he will make the Celebree School in Laurel a go-to resource for area families.”

After shoveling of the ceremonial turn of the dirt (in hardhats, no less!), the Patels are very much looking forward to their new franchise ownership opportunity with Celebree School. The Laurel, MD location is actually the first of two schools they intend to own and operate, in addition to their Tropical Smoothie Cafes.