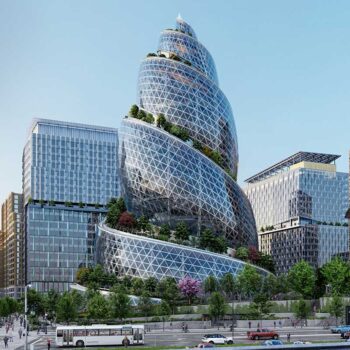 We’re so excited to announce the latest addition to our rapidly growing list of Celebree Franchises, Celebree School of National Landing! This opening is extra special for us, as will be located in Amazon’s brand-new headquarters (Amazon HQ2) in Arlington, Virginia.

Owners Kate and Brian Mulcahy are delighted to be launching their second Celebree location after opening their first school in Tyson’s Corner, Virginia in September 2021. “Partnering with Amazon will allow us to reach a larger subset of the region and provide more quality early childhood education to more families,” said Mulcahy. “The spotlight that Amazon’s presence puts on the community is so valuable, and the new residents it will attract will strengthen the fibers of the community.”

“We’re honored to continue to help brilliant entrepreneurs like the Mulcahys actualize their business goals,” said Richard Huffman, Celebree’s CEO. “As we continue to expand our brand’s footprint through franchising, it’s more important than ever that we partner with local community leaders who have a passion for early childhood education. Bringing Celebree School to Amazon HQ2 gives me immense pride and joy as we continue to drive our mission forward.”

Amazon hopes that as it continues to bring more small businesses to the area, HQ2 can be a destination for all the important areas of life, whether that be work, play, family time, or any of the moments in between. Signing on alongside Celebree are Good Company Doughnuts & Café, Glo30, and Peruvian Brothers, growing the total to ten small businesses to join so far. Other businesses Amazon previously recruited over the last eight months include Conte’s Bike Shop, District Dogs, HUSTLE, RAKO Coffee, Social Burger, and South Block. The first phase of Amazon HQ2 is set to open in 2023, with at least four more retail spots yet to be filled.

We can’t wait to be Growing People Big and Small at Amazon HQ2!

Learn more about Celebree of National Landing below:

Check out these renderings of the new space!