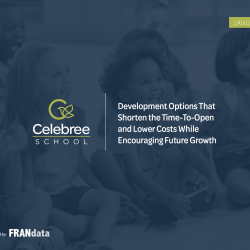 This second blog entry looks at the advantages of opening a Celebree School, whose flexible development options and lower real estate requirements speed up and simplify the process of opening a location, including comparisons to direct and indirect competitors.

Because Celebree School franchises are designed to reduce an owner’s time-to-open, our concept can accomplish a grand opening at a lower cost point, thereby encouraging future growth. The process of opening a childcare business can be time-consuming, typically 18-28 months. Celebree’s openings average 17-24 months from signing to grand opening. A comparison of start-up costs show Celebree is over 50% lower. And, per square foot, our concept is 34.7% below our direct peer’s average cost:

Celebree Offers Unit Scalability at a Much Lower Price Point

Unlike a majority of the competition, Celebree School offers new franchisees the option to enter multi-unit development right away. For others that do offer multi-development rights to existing franchisees, their initial franchise fee for the first unit is 28.3% above Celebree School. For second and third-unit averages, the fees rise above Celebree’s costs at a rate of 37.3% and 60.4%, respectively. Note:

Comparison by the Square Foot

The overall cost on a square foot level is markedly lower than several industry competitors with a similar footprints and investment levels. How much lower? On average, anywhere from 28-80%:

It’s easy to see that in a head-to-head comparison with direct and indirect franchise competitors, Celebree is the more flexible—and affordable—option for owning a business of your own through franchising. Stay tuned and check back for additional posts in Celebree’s FRANdata Review Series.