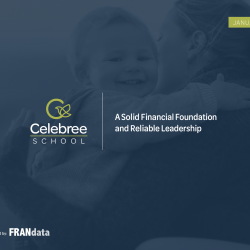 Prior to offering Celebree School as a franchised business, the brand already had 26 corporate locations established. Not only did this allow Celebree to enter the franchise market with a proven concept, but the brand had also already achieved recurring revenue self-sufficiency. This is a crucial financial threshold that allows for the support of new franchise operations. FRANdata’s study revealed that direct childcare competitors in the franchising space averaged only four to six locations by the fifth year:

Compared to the typical emerging brands of the franchise world, Celebree’s leadership strength positions the opportunity as an advantageous choice compared to other childcare startups. Celebree has a much higher number of dedicated team leadership members with much more experience. Experts in the day-to-day management of the childcare business industry, Celebree’s leadership of seasoned franchise veterans has established functionalities for finance, marketing, real estate, curriculum development, training, human resources, operations, and of course—franchise development.

Another critical factor? It’s not just leadership alone that counts. It’s leadership with experience, something Celebree has in abundance:

Celebree’s strong—and experienced—leadership, as well as their sound financial footing, create an advantageous opportunity for those seeking franchise ownership. Stay tuned and check back for additional posts in Celebree’s FRANdata Review Series.