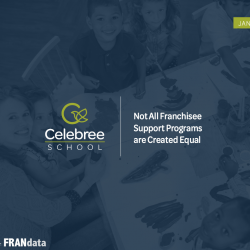 The fourth blog edition focuses on the robust training and support programs provided by Celebree. As you’ll see, not all of these programs are created equal. And the difference is plainly visible when compared to a cross-section of emerging brands in other industries with similar start-up costs.

With over 25 established locations in business prior to being offered as a franchise opportunity, Celebree had plenty of time to establish a comprehensive set of support programs. Other emerging childcare competitors? Not so much. Which is why Celebree’s model on the left looks like an undisturbed polar ice cap. And our direct competitors on the right look melted in comparison:

For Training and Support, Celebree Brings the Heat

As we compared Celebree’s superior level of comprehensive training and support programs, we hope you enjoyed the metaphor of melting ice caps. What these graphs really reveal is the amount of heat Celebree Schools bring to bear against our direct—and indirect—emerging brand competitors with similar start-up costs.