When Victoria Fredritz was a student at Celebree Learning Centers, she may never have guessed that years later she would be named Teacher of the Month by her Celebree peers. But that’s just what happened in our Eldersburg location.

Each month, teachers at the Eldersburg center vote for a Teacher of the Month. They use a pre-determined competency as a guide for their vote, and each vote must be accompanied by a reason for that vote. In March, the competency was “motivation and enthusiasm.” Former Celebree student Victoria Fredritz (known to the children as Ms. Victoria), who joined the staff as Assistant Teacher in November, 2013, was the winner. 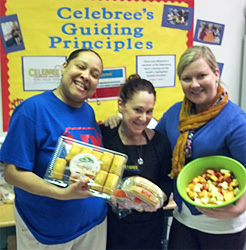 To celebrate their selection, the staff enjoyed an affirming lunch together, during which they made note of the positives they found in each other. Our educational super heroes are giving, caring, and proud of each other.