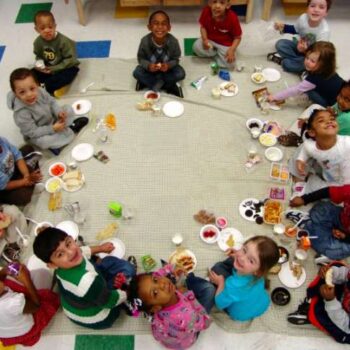 A new day care center to accommodate 190 children is planning to open in the new Carlyle Crossing development in January.

There are 750 luxury apartments in Carlyle Crossing, and the Celebree School of Alexandria will be located within the 1 million-square-foot luxury residential development, on the ground floor of the brand new 13,648-square foot space at 2450 Mill Road.

The daycare franchise will be located in the same building as the Wegmans (150 Stovall Street), which opened in May. Its hours will be 6:30 a.m. to 6:30 p.m. Monday through Friday and it will be able to hold up to 190 children and 30 staffers working on-site at any given time, according to a special use permit filed with the city.

The company has 26 corporate locations (24 in Maryland and two in Delaware), as well as 10 other franchises, and is “aggressively” expanding to open 150 new locations and franchises within the next three years.

“After developing successful schools in our home state of Maryland, Virginia was a natural next step as a target growth area for our continued franchise expansion,” said Richard Huffman, founder and CEO of Celebree School. “With a 25-plus-year history, we’ve built an incredible infrastructure for growth. By partnering with like-minded franchisees who believe in our brand and our mission, we’re poised for long-term success.”

There are four other Celebree Schools in Virginia — in Reston, Henrico, Ashburn, and Tysons-Jones. Sixteen new locations are also planned to open next year, including the Celebree School of National Landing, at Metropolitan Park in Arlington, in Herndon and Dulles.